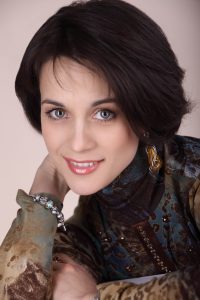 In 1988, Daria Sosnina entered the Perm State Choreographic School. During her studies, she took part in concerts and performances on the stage of the Perm State Academic Opera and Ballet Theater of P. I. Tchaikovsky, as well as on the stages of Ireland, Japan, and Israel. During her studies, Ms. Sosnina also participated in international ballet competitions, where she was awarded the diploma and prize of the Ministry of Culture of Russian Federation at the competition “Maya-94,” as well a diploma of the open competition “Arabesque-96”. In 1996, Ms. Sosnina graduated with honors from the Perm State Choreographic School in the class of Lyudmila Pavlovna Sakharova, a People’s Artist of the USSR and Honored Teacher of the Russian Federation. In 1997, Ms. Sosnina successfully completed an internship at the Perm State Choreographic School. During her internship, she showed interest in teaching and trained as a teacher of classical dance (attending lessons of the leading teachers of the school) and periodically conducted classical ballet lessons of her own. That year, she entered Perm State Pedagogical University, from which she graduated with honors in 2002. The theme of her final qualifying work reflected the specifics of her main activity in the theater: “The Relationship and Importance of Professional Results and Personality Characteristics of Ballet Dancers,” based on the repertoire of the Perm Theater.

From 1997 to 2011, Ms. Sosnina was a soloist at the Perm State Academic Opera and Ballet Theater of P. I. Tchaikovsky. During her career in the theater, Ms. Sosnina prepared and successfully performed solo and leading roles, including the Pas de Trois in P. I. Tchaikovsky’s Swan Lake (P.I. Tchaikovsky); Ingrid in E. Grieg’s Peer Gynt (E. Grieg);The Ballerina in Maestro (R. Shchedrin);Mary in The Cavalry Halt (J. Armsheimer); The Step Sister in Cinderella (S. Prokofiev); and the leading role of Swanhilda in Coppélia (L. Delibes). She also performed in a number of modern and contemporary choreography. The management of the theater also trusted her with tutoring activities. In 2000, Ms. Sosnina continued her professional education by entering The Academy of Russian Ballet of A. Vaganova in St. Petersburg. In 2004, she was invited to the Perm State Choreographic School as a teacher of special disciplines.

From 2004 to 2011, Ms. Sosnina successfully combined her work at the Perm State Academic Opera and Ballet Theater with her studies at the Academy of Russian Ballet with pedagogical activity in the choreographic school in Perm. In 2005, she completed her training in Academy of Russian Ballet. Upon graduation, she was awarded a bachelor’s degree and qualification of teacher/tutor of ballet and choreographic disciplines. Her thesis was “Teaching Classical Ballet in Middle and High School.” She has improved the level of her qualification at courses in the Moscow State Academy of Choreography in 2007, 2008, and 2010.

In 2013, she successfully defended her dissertation research on the topic: “Stress Resistance in Artistic and Creative Activity in the Integral Study of Individuality (On the Example of Ballet Dancers).” The program of performance quality assessment developed in the course of that research has been introduced in the educational process of the school and is actively applied in practice by the Examination Commission on special training in the Perm State Choreographic School.

Ms. Sosnina’s experimental and innovative developments were presented and discussed at the XVI International Conference of Students, Postgraduates and Young Scientists “Lomonosov” (Moscow, 2009); the Second International Congress on Pedagogical, Psychological and Socio-Cultural Aspects of Behavioral Problems of Children and Adolescents (Perm, 2010); the Second Siberian Scientific Congress of the UNESCO World Council in the Direction of “Choreographic Art” (Novosibirsk, 2011); the international conference, Russian Ballet as a World Phenomenon in the Contemporary Cultural Process (Moscow, 2012); the second international full-time scientific and practical conference, Choreographic Education: Russia and Europe, State and Prospects (St. Petersburg, 2013.); and the second St. Petersburg International Cultural Forum, with a scientific report called “Choreographic Education in the XXI Century: Traditions and Innovation” (St. Petersburg, 2013).

Along with her own methodological developments, Ms. Sosnina has repeatedly organized and conducted training courses for employees of cultural and educational institutions of the cultural sector, teachers of children’s art schools, and teachers of secondary schools in Perm. Under her leadership, the all-Russian scientific and practical conference, The Role of Stage Practice and General Professional Discipline in the Training of a Highly Qualified Ballet Dancer (2013), was developed and held.

During her work as a teacher, Ms. Sosnina actively participates in the rehearsal work of the school, where she prepares fragments from various ballets of classical heritage and modern repertoire. From 2014-2018, she acted as trainer in special education at the Perm State Choreographic School. She continues to work with gifted students and prepare dancers for performances at competitions, where her pupils are often awarded laureates. Ms. Sosnina’s graduates work in the theaters of Moscow, Krasnoyarsk, Samara, Vladivostok, St. Petersburg, and more. Ms. Sosnina is also involved as an expert in the jury of all-Russian festivals and competitions.

Ms. Sosnina has been published in more than fifteen publications, including two articles in peer-reviewed journals, as well as publications issued in the Russian Federation, and three teaching aids: “Individualization of the Educational and Rehearsal Process, Depending on the Temperament of Future Ballet Dancers” (Perm, 2013), “Organization and Planning of the Educational Process in Choreographic Schools: Handbook” (Perm, 2014), and “Lesson as the Main Form of Educational Process in the System of Choreographic Education” (Perm, 2018).

Ms. Sosnina continues to take an active part in the cultural life of the region and served on the 2017-2018 Council under the Perm Ministry of Culture, which awards prizes in the field of culture and art. Since 2018, she has been the head of the Perm State Choreographic School.