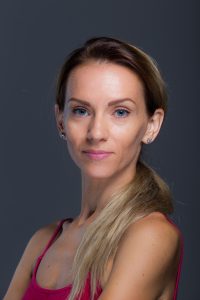 Adela began her ballet studies in 1991 at the Liceul de Artă Sibiu – choreography sector, under the guidance of professor Iby Cristea, she went on to graduate from the “Floria Capsali” Choreography High School in Bucharest in 1999 and the Universitatea Națională de Artă Teatrală și Cinematografică “I.L. Caragiale” București – choreographic creation section, in the class of Professor Sergiu Anghel, in 2003.

From 1999 until 2009 she was a soloist of the National Opera House in Bucharest. She won the first prize in the contemporary dance section of the National Contest in Bucharest, led by Professor Florin Fieroiu, and the choreographic award for the performance ‘The Joys of the Virgin Mary’ at the National Theater of Theater and Cinematography ‘I.L. Caragiale’ in 2003.

Adela collaborated with the Odeon Theater in Bucharest for the performance of ‘Portrait of Dorian Gray’ by choreographer Răzvan Mazilu which was presented at the Romanian Cultural Center in Brussels in 2007, when Romania joined the European Union. She performed the title role of ‘Giselle’ at the National Opera in Brasov.

Since 2011 he has been a prim-soloist ballerina of the Sibiu Ballet Theater, performing principle roles in the performances of ‘Les Sylphides, Chopiniana,’ ‘Paquita,’ ‘The Nutcracker,’ ‘Giselle,’ ‘City Beat,’ ‘Carmen,’ ‘Seasons,’ ‘Coppelia,’ ‘Swan Lake,’ ’Scheherezade’ and more.

She returned to the stage of the Ballet Theater in Sibiu, after giving birth to her second little girl, in the role of Anna Karenina, one of her most beloved roles of her career. At the moment she is one of the Ballet Masters of the company.