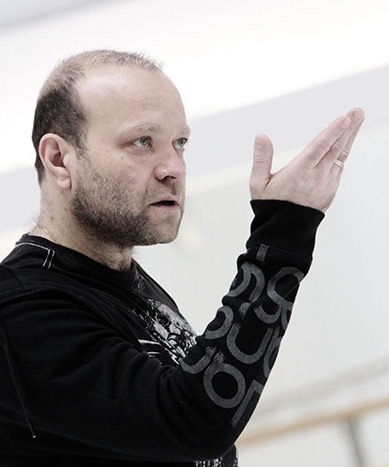 Born in St. – Petersburg. He completed his ballet training at the Vaganova Ballet Academy and was immediately engaged by the Kirov (Mariinsky) Ballet, where he advanced to the position of principal dancer. Even here, the western press began to take notice of the outstanding dancer.

From1992 untill 2005 Kirill Melnikov was principal dancer with the Bavarian National Ballet in Munich. Here, he was quick to learn the Western repertoire. Today, his roles include Romeo in John Cranko’s “Romeo and Juliet” and Onegin in Cranko’s ballet of that name, in which he had a major success in New-York. Petruccio in “The Taming of the Shrew” became one of Melnikov’s showcase roles.

Since 1998, he is ballet-teacher in University of Music and Performing Arts in Munich. In 2002 become Professor. In the same University in 2000 he received the
diploma as ballet pedagogue (class Prof. A.Prokofiev).

In 2002, Kirill Melnikov has received “Mercury – prize” as one of the best artist of the year in Munich. Video recordings with the Kirov-Ballet include “White Nights in St.-Petersburg” and “Classic Kirov”. “Black Cake” with the Bavarian State Ballet. From 2003 untill 2005, Kirill Melnikov was Artistic Director of “The Russian Fairytale Ballet Productions” company. His production, “The tale of Tsar Saltan and The Enchanted Swan” ( by Alexander Pushkin), had its world premiere in Munich in December 2003 where it received standing ovations and critical acclaim. He also took the leading role in this premiere. This ballet was successfully performed in Dublin in March 2005.